Disc stack centrifuges contain a metal bowl that rotates at a high RPM. Any rotating mass that is not correctly balanced causes vibrations. Therefore all disc stack bowls generate vibrations to varying degrees in the centrifuge under normal conditions.

Under certain conditions, the disc centrifuge may vibrate more than usual, which is a cause of concern due to its effect on the centrifuge's durability. In rare cases, excessive vibration can lead to catastrophic damage to the equipment.

The common causes of unusual or excessive vibration are as follows. We explain each of these causes and make it easy to correct them in the individual sections below.

The most common reason for excessive disc centrifuge vibration is missing bowl discs. As the name implies, a disc stack centrifuge has a set of discs inside the bowl. The bowl lock ring (large lock ring) compresses the bowl hood, the disc stack, and all other bowl components during the assembly.

This action rigidizes the entire bowl into one integral assembly. The assembly, as mentioned earlier, is dynamically balanced during manufacturing.

The tightening of the lock ring of the bowl is a laborious task. Therefore, it is common for operators to leave out a couple of discs from the assembly to ease the re-assembly. These missing discs prevent the bowl assembly from forming a ‘tight’ pack and imbalance the bowl. The slightest of imbalances leads to vibration at the high operating RPM of the centrifuge.

Over time, the discs within the disc bowl compress and wear, which causes the disc stack to ‘settle’, meaning it compresses down to a reduced height compared to the new stack. This compression causes a similar issue to that with missing discs.

The obvious solution is to have the correct amount of discs in the bowl to avoid this cause of imbalance and subsequent vibration associated with it.

Though a disc stack centrifuge’s bowl parts have position alignment features, an untrained operator can assemble the bowl incorrectly. A single misaligned component within the dynamically balanced bowl can cause an imbalance and related vibration of the bowl.

For example, if the top disc is not aligned correctly on the distributor during bowl assembly, it will imbalance the bowl. Therefore, proper bowl assembly is crucial to disc centrifuge operation without excessive vibrations.

The bowl spindle of a centrifuge is the part that transmits the rotation to the bowl body placed on it. The slightest deviation (runout) of the spindle will cause amplified vibration of the rotating bowl.

The repeated impacts sustained by the lock ring during bowl assembly are the primary cause of spindle runout. The runout must be checked periodically during routine maintenance to avoid this deviation as the cause of unusual vibrations.

The bowl spindle’s replacement is crucial if the spindle runout is more than 0.1 mm (as shown above).

There are often multiple centrifuges of the same type at operating facilities. It is quite common for operators to ‘steal’ useable parts from a non-functional centrifuge to a centrifuge under repair. This activity is known as the interchanging of bowl parts.

It is important to remember that most bowl parts are dynamically balanced. Interchanging components between bowls will cause an imbalance in the bowl. Again, this imbalance will lead to excessive vibrations. 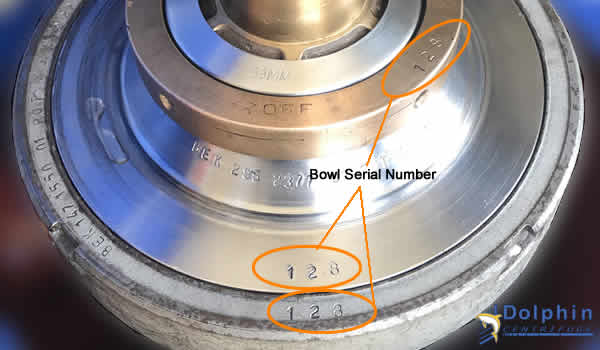 The bowl serial number is punched on most large bowl components. This marking makes it easy to identify matched bowl parts to avoid accidental interchanging and related vibrations.

Other disc-centrifuge articles of interest......

Sometimes the disc centrifuge bowl is accidentally allowed to overpack with solids. This occurrence is often due to an incorrect or delayed sludge ejection cycle. If the subsequent ejection cycles do not rid the bowl of all solids, especially from the inter-disc space, the retained solids will cause a bowl imbalance and vibrations.

In some cases, the sludge to be separated from the liquid is very sticky. This sludge may not evacuate the bowl entirely during the sludge ejection cycle. The retained sludge, in this case, can cause an imbalance and the bowl to vibrate.

In either of the cases mentioned above, a thorough inspection and cleaning of the bowl assembly are essential. This process will generally bring vibration back to normal levels.

Bearings are critical components, especially in disc centrifuges, which rotate at high speeds. The high-speed bearings on the vertical spindle of a disc-stack centrifuge are specially designed. These parts are made to very close tolerances to minimize vibrations during operation.

As explained previously, bearings wear out over time with constant usage. The gradual wear of bearing races and balls deteriorates the performance. This degradation leads to increased vibration of the centrifuge. 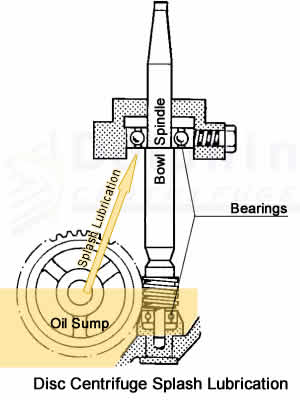 It is essential to consider that the bearings are splash lubricated in disc centrifuges as shown above. The lubricating bath also houses the worm and worm wheel gear-set as well. The wear of these gears introduces fine metal particles into the lubricating oil. The metal particles can cause unanticipated bearing failure during operation.

Therefore, timely replacement of the gearbox lubricating oil is essential to avoid such failure and related extreme vibration at operating speed.

Such major bearing failure can cause catastrophic damage to the centrifuge and possibly cause human injury.

Clutch Pad(s) Worn Out or Missing.

Clutch-driven centrifuges have friction pads that are attached to the rotating shoes. These pads are consumable parts that tend to wear out with use.

If the friction pads are worn out or fall off due to loose fasteners, the metal blocks direct contact with the steel drum. This metal-to-metal contact causes the drum to score and wear out from within unevenly.

As referenced in the imbalance of the horizontal shaft above, the drum’s uneven wear causes a similar imbalance, leading to centrifuge vibrating.

It is essential to monitor the clutch assembly on a periodic schedule to avoid vibrations due to worn-out friction pads.

Freezing causes ice to form unevenly within the bowl cavities, especially if the centrifuge is not perfectly level. On startup, this solid ice mass causes a severe imbalance in the bowl. This unbalanced load can cause violent vibration of the bowl to the detriment of the equipment.

The distributor (aka disc carrier), which holds all the discs, has an alignment rib to orient all the disc holes for fluid passage, as shown in the image below. 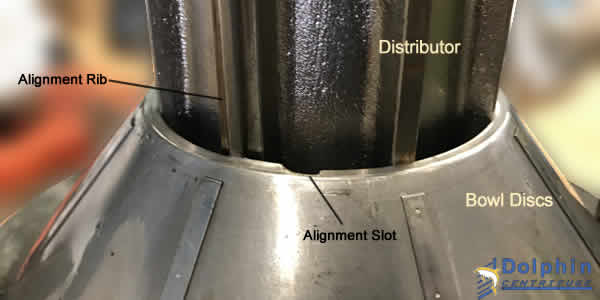 There are cases where the operator has not assembled the bowl correctly, or there are missing discs. Under such conditions, the loose discs (without compression) tend to impact the distributor’s locating rib. Repeated impacts cause the disc slot to open up, allowing some discs to spin and lose their orientation.

Similarly, the wing inset (shown in the image below) can also lose its orientation in a loosely packed bowl. The wing inset is a relatively heavy part of the bowl. A misaligned part in the rotating bowl causes an imbalance (as explained above). This misalignment is another possible source of centrifuge vibrations. 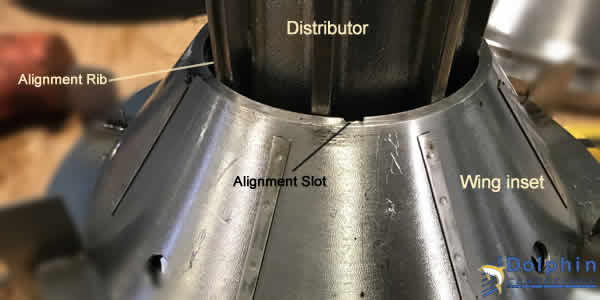 One can avoid spun discs or wing insets causing centrifuge vibrations. To prevent the imbalance, keep the bowl in good compression by ensuring the right number of discs are present.

As detailed above, there are various causes of disc centrifuge vibrations. But, in general, excessive vibrations in a disc stack centrifuge are detrimental to the durability of the centrifuge machine, specifically to the bearings.

In rare cases, violent vibrations can cause catastrophic damage to the machine and personal injury to the operator. Therefore, it is imperative to monitor centrifuge vibration levels consistently and that all instances of excessive vibrations are thoroughly checked and remedied promptly.