Difference Between Purifier and Clarifier Centrifuge 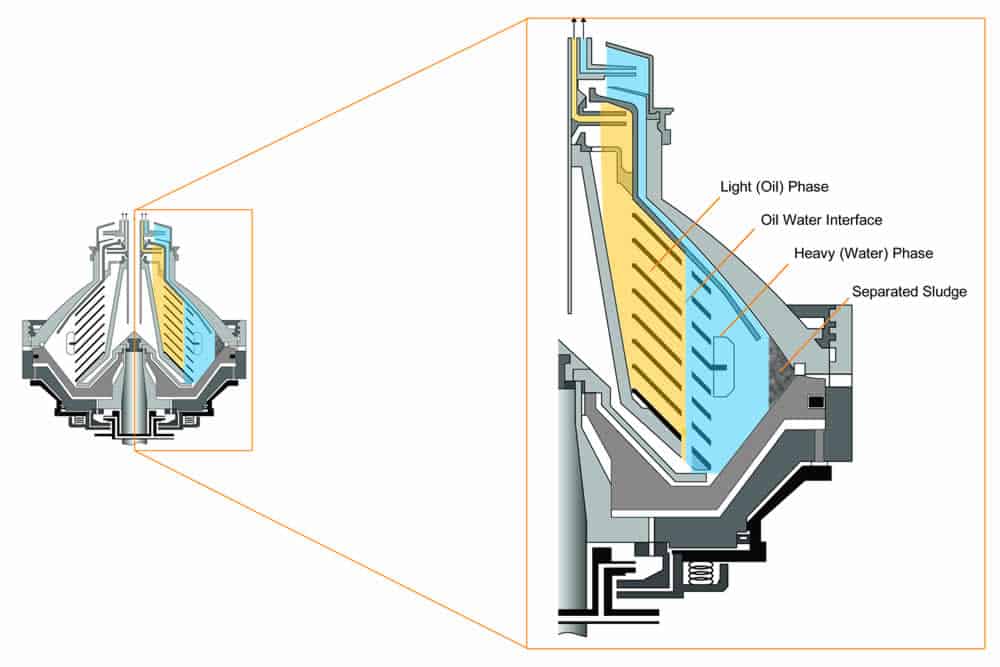 This illustrated article explains the technical differences between these two types of disc-stack centrifuges.

A purifier is a disc-stack centrifuge that separates one liquid from another liquid and solid particles (if any). A purifier centrifuge can continuously separate two liquid phases and one solid phase.

The illustration below shows the bowl cross-section of a purifier centrifuge. The incoming process fluid enters the disc stack through the hole in the distributor. The corresponding holes on the bowl discs line up and create a vertical passage for the process liquid.

As it passes through the discs, the centrifugal force causes the solids to move towards the bowl periphery. The solids being the heaviest, accumulate in the sludge space at the outer edge of the bowl.

These separated solids are intermittently ejected from the bowl by the self-cleaning operation of the bowl. In manual cleaning centrifuges, the operator must manually remove the sludge from the bowl.

The dense phase (water) also moves radially outward from the bowl rotation axis. The water collects in the water space, as shown in the diagram.

The incoming separated water displaces and pushes this accumulated water over the top disc into the water chamber at the top of the bowl assembly. The water gets pressurized by the water-paring disc and escapes the bowl through the heavy phase outlet.

The separated light phase (oil) moves towards the center of the rotating bowl. It rises through the oil passage on the distributor. The oil then enters the light phase chamber inside the top disc. The paring disc pump expels the separated oil under pressure from the bowl.

A clarifier centrifuge separates a liquid phase from the solids in the fluid. In other words, it is a liquid-solid separation device. Therefore a clarifier continuously separates the solids from liquid-carrying solids.

The diagram below shows the cross-section of a clarifier centrifuge bowl.

This closure prevents the fluid from entering the disc stack through the bottom holes or fluid passage mentioned above.

The incoming liquid enters the disc stack from the outside. As the fluid passes through the disc stack, the heavier solids move outward due to the centrifugal force.

Also, in a clarifier centrifuge, the gravity disc is replaced by a sealing ring (clarifier disc), closing the passage of water to the water chamber in the bowl top. This closure of the heavy phase pathway essentially blocks one fluid passage from the bowl.

All the processed fluid moves towards the only exit in the bowl. The liquid passes through the disc stack into the fluid passage between the distributor’s ribs. The fluid then enters the light-phase chamber inside the top disc.

The centripetal pump (paring disc) converts the liquid’s rotational energy into pressure, and the pressurized fluid exits the bowl through the light phase pathway.

Clarification applications involved the separation of solids from one liquid phase. Clarifier centrifuges are used in all of these applications.

Conversion Between Purifier and Clarifier Centrifuges

As mentioned above, two essential components are required to convert a purifier to a clarifier centrifuge. The first and most crucial part is a clarifier disc or a sealing ring.

It is important to note that though it is possible to convert all purifiers to a clarifier, switching a clarifier to a purifier centrifuge is not always possible.

This inability to modify is because some centrifuges designed as clarifiers do not have a water chamber. They may also lack the water-paring disc pump and not have a provision to install a gravity disc.

Other disc-centrifuge articles of interest......

A clarifier is a simplified version of a purifier centrifuge. This difference between the centrifuge configurations reflects in the operation of either design.

Firstly, a clarifier does not require sealing liquid due to the absence of the gravity ring. Since the heavy phase outlet is closed out by the sealing ring, the incoming process liquid fills the bowl and can only exit the bowl through the light phase outlet.

In a purifier, sealing liquid is needed before feeding the process fluid to the bowl. This liquid is also known as the priming fluid and typically consists of the fluid's heavy phase.

The priming liquid prevents the incoming process fluid from escaping the bowl through the heavy phase outlet.

Fourthly, liquid seal breaking is a common occurrence in purifier centrifuges. When the heavy phase or sealing liquid is not present in the bowl or escapes the bowl during operation, the light phase exits the bowl through the heavy phase outlet.

This issue is known as a “liquid seal break” condition. Since there is no sealing liquid in a clarifier, this problem does not occur in clarifiers.

What is a Concentrator Centrifuge?

A concentrator centrifuge is a purifier centrifuge specially configured to separate fluids with a large proportion of the heavy phase (water) from a smaller percentage of the light liquid (oil).

It is also a three-phase centrifuge, which implies it simultaneously separates the solid particles as well.

An example of a concentrator application is separating water-based machining fluid from tramp oil and metal fines. In this case, the coolant is mainly water and is the majority phase that the user wants to separate from the tramp oil.

Another example of a concentrator centrifuge application is the separation of oil from water-based parts washer fluids.

A purifier centrifuge with minor modifications is known as a concentrator. The main change is the position of the holes in the distributor and disc stack.

The holes in a concentrator disc stack are moved radially inward towards the axis of rotation. This change allows for a more settling area for the coolant, which is the desired fluid.

The following is a list of concentrator centrifuges and their processing capacities available from Dolphin Centrifuge.